iii
Painting teaches me how to make music. Tells me how to use space, and how simplicity is 99.99% the best choice. Visual art also opens up horizons of possibilities otherwise unthought of. i.e: what if the main subject is half out of frame, and how does that idea translate to music? A lot of things come down to the mix.. if there was an inter dimensional element to a piece of art (an excepted component of modern art) how could such an idea translate to music? The song ‘the mystery zone’ by spoon is a great example of effectively conveying such a feeling. Verses cut out mid phrase as though they have vanished like an observed electron would do. Very cool. 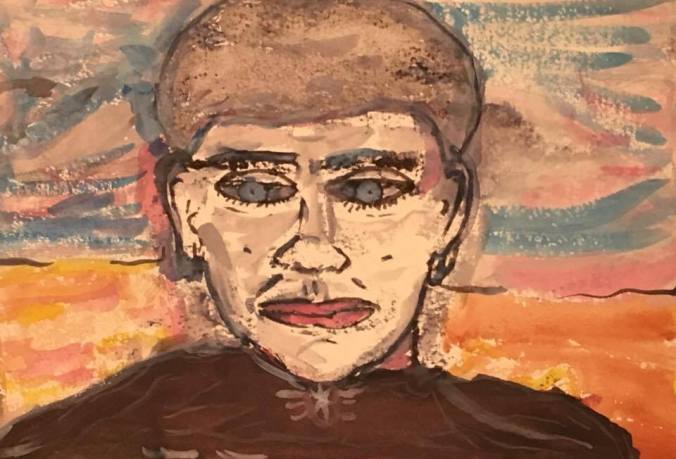 I think we are on the verge of music catching up with modern abstract visual art, and I am very excited to see it come into the mainstream. Kendrick Lamar is doing it. Frank ocean is doing it. Lots of people I’ve yet to discover must be doing it. Jazz and modern classical have been doing it arguably for a while now, but the people have not yet accepted it totally. Probably because we are by design more visually developed than aurally. For me, in regards to my future as a creative person, the visual arts and music will hopefully continue to inform each other in new and exciting ways.
———————————————–
In anticipation of Saturday’s launch of “Gunslinger” I’m excited to share the debut of “Ocean Salt Breeze” from the album featuring paintings and artwork by Andrew James Barker:
Be sure to join us for the launch of “Gunslinger” this Saturday Oct 21st at Gerrard Art Space: 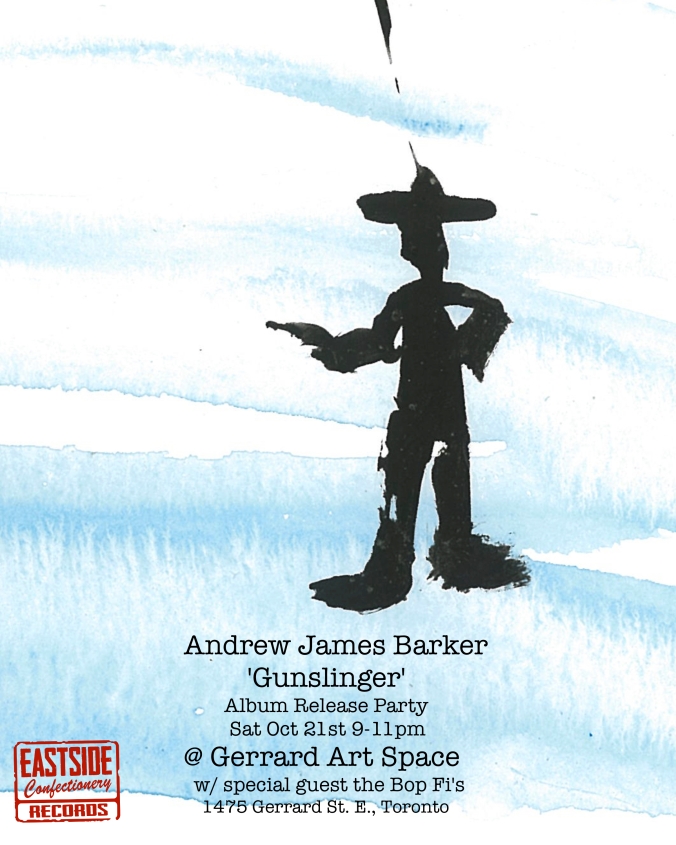 Gunslinger launches digitally worldwide on October 24th, 2017 on Eastside Confectionery Records and will be available on iTunes, Spotify, GooglePlay, Deezer and more!
Pt2
With painting nothing is ever ruined. Even after the ink or paint has spilled and bled all over the place, once it’s dry you can pick yourself up where you left off and make the best of it.
It’s actually in those times when the stakes are at their highest, or when you’ve already kinda failed, that you can throw the risk of failure out the window and get on with it. It’s also that tightrope of anxiety and abandon  from which the best work originates. 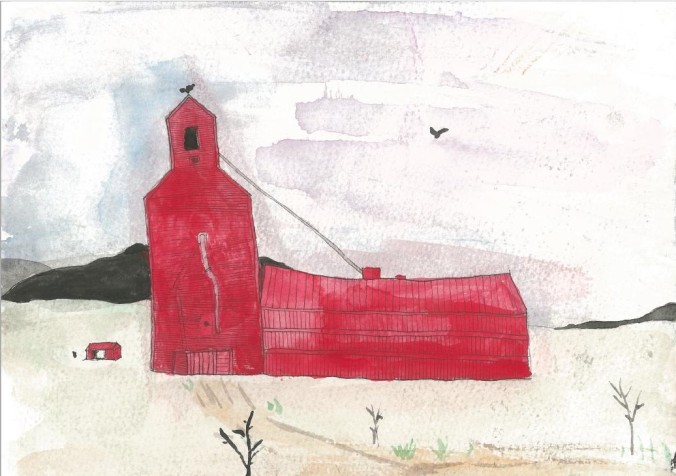 Of all things to bring me back to considering making art again, the first inklings came while refurbishing pipe organ components (lots of leather pneumatics and little mechanical parts). Being in a shop gave me access to a lot of materials similar to an artists studio, and a lot of tools. Working with my hands on those components is a very craft like occupation . While in idle time waiting for something to dry (or in the case of hide glue, warm up) I’d often find myself doodling , or arranging scraps of leather into artful images… and it felt great! Then the thought would gently seep into my head ‘maybe I should make art again’?
‘We’ll see’,  I’d reply. 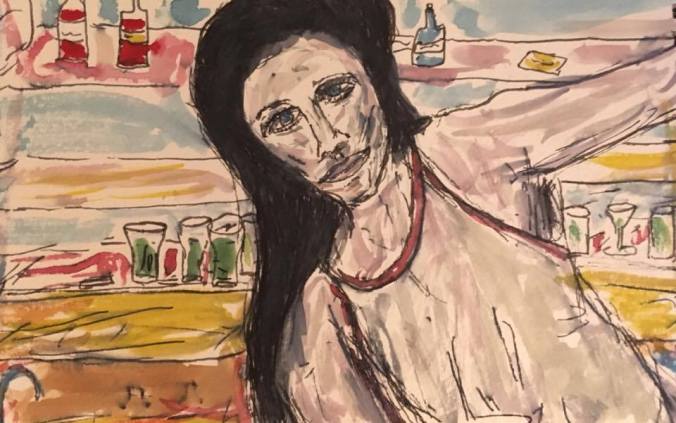 Then one strange day while my friend , fellow songwriter and indie label originator Eric Brombacher (of Eastside Confectionery Records) and I were scheming about my future album releases told me he wanted me to draw or paint for my next release I was immediately thrown into a state of dumbfounded joy. The medium for getting my art out into the world had just fallen into my lap and it felt profound.
Did he know that I used to love making art? How could he?
‘I used to draw and paint a lot’ I said, thinking to myself so did everyone and their grandmother. Well, I decided, I’m going to do it! And I’m going to show that I’m just not everyone and their grandmother!
Eric believed in me, and that was just the little push I needed.

I think paintings are like steak, better under done than over done. A revelation I hope I can remember and put into practice often. 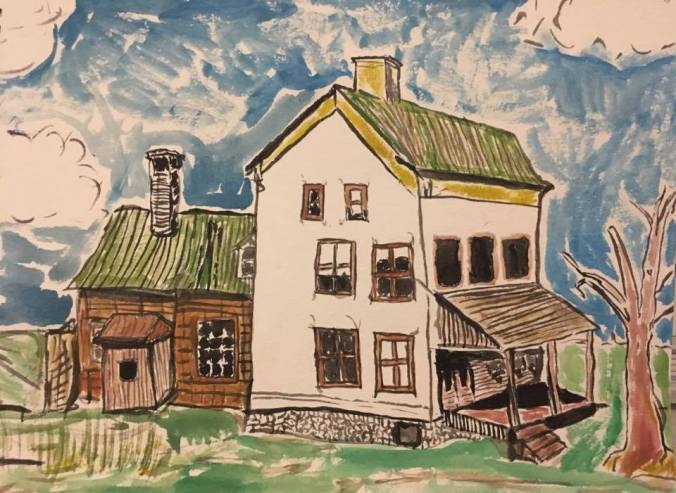 Join us for the launch of “Gunslinger” by Andrew James Barker on Saturday October 21st, 8:30pm at Gerrard Art Space (1475 Gerrard Street East) — Special Guests: The Bop Fi’s!
For me making visual art has a direct connection to expression, to ‘saying something’, and rediscovering this immediate expression has reminded me (after having studied the craft of music for such a long time) the importance of expression over craft in music. 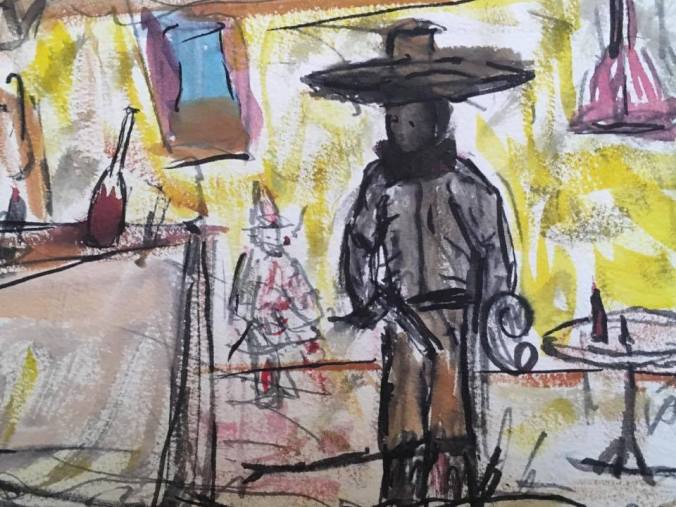 I think I stopped making art because there were people who were better at it than me, and that made me envious, and the envy took the fun out of it. Now, I try to just make art for the joy and self growth it provides me. Of course there is a part of me that hopes people will be able to relate to my work and discover something of themselves within it.
Painting and drawing was one of the first things I did as a child that gave me self esteem, but also one of the first things I did that got me into trouble. Apparently, while attending kindergarten, I painted a picture of a naked lady. The teacher thought this was unusual and told my mom. I still don’t see what’s wrong with painting a naked women? I guess all good things in this world come with their share of controversy.
Fast forward four or five years and there I am drawing on my desk. The best one I ever did was a portrait of a ninja I did in my grade 5 portapack. I remember this habit of mine being major source of conflict between my teachers and I. Drawing was much more rewarding to me than listening to the lesson, and I had the source of pride that when the class switched over to the next period, my desks next inhabitant would enjoy the fruits of my labor.
There is a transient element to painting that this memory brings to the fore. The fact that the painting wasn’t mine anymore after it was finished, and that I had to let it go in order to fulfill its destiny. One well meaning teacher tried to get me to tape paper down to my desk and draw on that, but it just wasn’t the same… years later I discovered a similar lack of connection with prophylactics. On a technical note, I liked the way pencil shaded into the desk top in a much more malleable way than it did with paper, and I didn’t like the stark white of the paper compared to the warmer desktop finish. I was indignant that the teacher thought the cleanliness of my desk took precedence over my artistic expression and development. Why couldn’t they see how important this was? Why didn’t they know how it was one of the few things that I felt I could do that made me unique and of value? Why would a so called educator want to take that away from their student? From a child? It still boggles my mind. My parents and sister were pretty supportive, and
I would be remiss to not account the few teachers who did encourage me. There were some, but mainly it was the impressed comments and looks that my peers gave me that kept me going. That is, until I stopped. 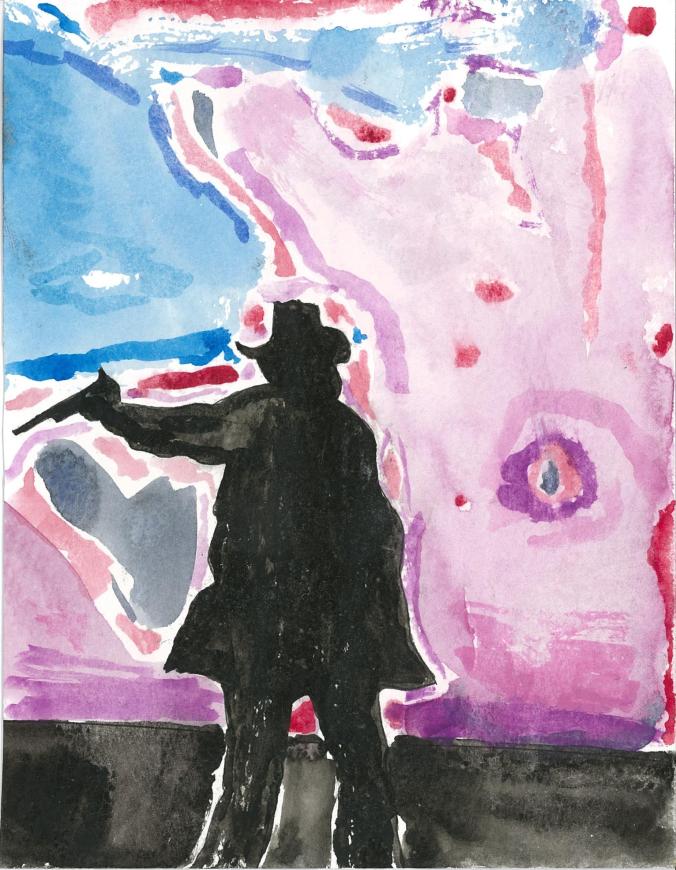 Later there would be discouragement from friends, looking back I think it resulted from either envy or a myopic understanding of who I was as a person… to a degree, maybe I was responsible for that by misrepresenting myself to my peers out of insecurity.
This was after I’d pretty much stopped drawing or doing anything artistic other than music, and if I made an offhand remark that I liked art and had some talent, they’d laugh and say something like ‘ya andrew, the artist, haha!’
Being sensitive, this would make me crawl even further from considering making art again.
But art wanted to come out, and it would in bursts when given a chance. All it may take was a pen and a loading dock on a summer job and I’d lose my self for an hour here and there.
Join us on Saturday October 21st at Gerrard Art Space for the launch of Gunslinger by Andrew James Barker: